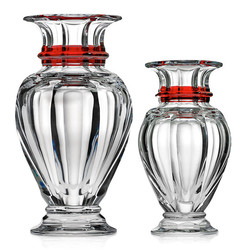 History of the Moser glassworks and Moser crystal

History of the Moser glassworks is historically associated with the name of Ludwig Moser (1833 – 1916), one of the most outstanding personalities of glass manufacturing in the world. He first opened his own shop and engraver´s workshop in the centre of Karlovy Vary and in the same town in 1893 he starts production in his own glass workshop, which has been operating successfully until today. Within a short time he gained the reputation as the most prestigious producer of crystal in the Austrian-Hungarian monarchy. The titles of the court suppliers of emperor Franz Joseph I (1873), Persian shah Musaffereddine (1901) and king Edward VII of England (1908) further increased the reputation of the crystal and the interest of other politicians and emperors. Then, in the year 1922, Moser glass manufactory became the biggest producer of luxurious drinking and decorative glass in Czechoslovakia. The success of Ludwig Moser, whose heritage has been developed since then, consists in the production of ecologically friendly lead-free crystal, of a unique colour spectrum, specially designed by the most prestigious designers and in excellent hand manufacturing. To develope this tradition, Moser glass manufactory co-operates with the most talented designers, glassmakers, cutters and engravers, whose craftsmanship helps create masterpieces in their branch. From its very beginning, its products are being presented in the most important world exhibitions, in which they have been awarded with important awards. Special pieces of art require a selected international sales network. The first specialized shop Moser was opened in the centre of Prague in 1925. Since that time, the inland sales have spread to three more brand shops and by exclusive representatives worldwide. Nowadays, the glass manufactory is a joint stock company with entirely Czech capital and approximately 320 employees.

Unrivalled, dense, clear, sonorous and luminous, born of a ball of fire and the breath of man, Saint-Louis crystal vibrates with all the talent inherited from History and extraordinary creative fantasy inspired by current trends.

Today, Saint-Louis signs every day crystal pieces created by master glassmakers and glasscutters among Les Meilleurs Ouvriers de France. They all have a unique expertise, enriched from generation to generation. Thanks to advances authorized by chemical and mechanical processes, for some invented in the 19th century, Saint-Louis also introduced the most advanced techniques in coloring the crystal, hot shaping, cold cut, the most sophisticated patterns engraving and gold ornament.

Back
Back to top